Traveling to China was the first time we’d ever crossed the International Date Line.  Both coming and going, I totally lost track of the number of hours spent flying, and waiting, and flying.  All I know, is we left one day, arrived the next, and that jet lag going was nothing like when we came home.  (I’m still having “blips.”)  In Vancouver, our originating city, I began to “suss” out who might be joining us for this ten day, five-city tour.  Once in Beijing, as we waited for our Shanghai connection, the group became apparent.

We arrived in Shanghai with half our party, including me, missing our luggage.  After two “no show” spins on the carousel, I wasted no time finding the baggage claim folks to launch our collective inquiry.  I had a feeling it was in the building, but just in case, got our tour guide’s cell number in case we needed to make arrangements for delivery to our hotel.  Several minutes later, all pieces came wheeled out.  A simple mis-sorting error.  After many hours delay in Beijing, and then this, our group was over-weary and most grateful to bed down in sumptuous rooms.  If only I knew how to get hot water out of the taps and into the tub.

After a terrific “West meets East” breakfast – I ventured East with tea eggs, a spoon full of rice congee, dumplings and stir fried and pickled vegetables – we boarded the bus and began our first of the whirlwind tours of the “must see” sights.  David, our guide, regaled us with Shanghai’s history as we drove past our first sightings of hundreds of apartment buildings, bicyclists, construction cranes, and clothes hanging from balconies and windows.  Over the Garden Bridge to walk The Bund, a fifty-two block architectural museum, representing Shanghai’s financial and cultural history over the last century.

Across the Huangpu River, to Pudong with its ultra modern corporate design, and skyline marked by its Oriental Pearl and Jinmao Towers.

After a Mongolian hot pot lunch (ours here in Edmonton, as good!), we were introduced to one of China’s ancient arts, silk dying and carpet weaving, and made our first purchase: a small square of red silk, with a golden dragon, phoenix and peal, quintessential China. 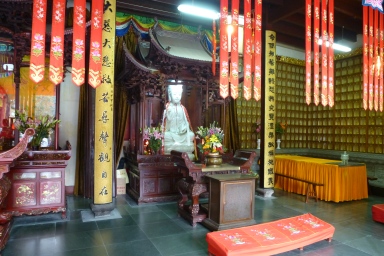 A quick stop at the Jade Buddha, c. 1882, home of historic and current Buddhist practice and ceremony and then back to the “mother” river for an evening boat cruise, the first of several water tours, to see the morning’s architecture brilliantly illuminated.

Day Two in Shanghai shone sunny and warm as we made our way through the throngs to cross the Zig Zag Bridge into the first of several classical gardens we’d visit, Yuyuan.  First built during the Ming Dynasty over 400 years ago, its feng shui influence in design, space and elemental placement continue to evoke a serene elegance, despite hundreds of people pressed in to take pictures. “Body massage,” as David called it.  Cherry blossoms, camillias and magnolias were in bloom, adding softness and a touch of pink.

By the end of our 36 hours in Shanghai, each of us had done our best to support the local economy, the night before, along the Nanjing pedestrian way, and in Old Shanghai Road’s shops and street markets.  “Show and tell” as we drove to Suzhou, the second of our China cities.

attending to the inner life to live and lead with kindness, clarity and wisdom; writing to find the beauty in her wabi sabi life
View all posts by Katharine Weinmann →
This entry was posted in Uncategorized and tagged Bund, Shanghai, The Power of Place, Travel. Bookmark the permalink.

I'd love to read what you think about this post. Cancel reply