Suzhou: “Venice of the East”

…Or so say the travel brochures and guidebooks.  Pronounced “sue-joe,” this city, a few hours drive west from Shanghai, was founded in 514 BC as the capital of the Wu Dynasty.  It’s been designated a UNESCO World Heritage site because of its classical gardens, nine of which, dating from the 11th – 19th centuries, are deemed masterpieces in having recreated natural landscapes in miniature, “in which art, nature, and ideas are integrated perfectly to create ensembles of great beauty and peaceful harmony.”  But that was day two.

We left Shanghai in the afternoon, anticipating a restful drive “in the country,” said David, our guide.  Green space and open sky would be a pleasant relief after Shanghai’s density and intensity.  Hmmm…green spaces the size of tablecloths, scrunched between apartment towers, light industry, and more apartments.  Oh, look, some open sky…darn another crane, another apartment tower.  And so it went on for a couple of hours.  Snooze time for those of us for whom “country” means two whole, vast days of driving across ours, with hardly a tree in sight, let alone a town or tower.

Arriving during after-work rush hour, bicycles, buses, scooters and cars wove in and out, while pedestrians skilfully made their way home.  Flat bed farmers’ markets popped up on street corners and added to the chaos.  We were on our way to a bit of serenity: a boat ride through Suzhou’s canal system, hence the name, Venice of the East.  Dating back to the 5th century BC, China’s Grand Canal was constructed from Beijing to Hangzhou, passing through Suzhou, becoming the world’s longest artificial river. 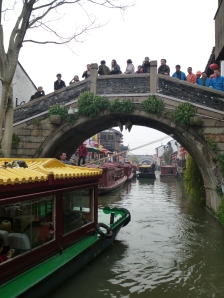 I missed our raconteur, opting instead for an outside seat in the stern, better to take pictures.  For a couple of hours, as we cruised during the windless late afternoon, we became voyeurs, nonchalantly passing by the lives of river folks.  Open windows into kitchens cooking dinner, laundry hanging, bags of vegetables on doorsteps delivered earlier in the day by boat, women doing laundry on the canal steps, men conviving after work…a very different pace from the Venetian canals which act as superhighways, given Venice’s “no car” policy. 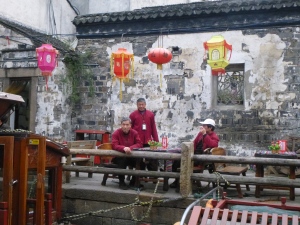 The next morning, before rush hour, we ventured into the old city where, to preserve its historic character, all buildings must not exceed a height of six stories.  This time a quiet walk through a system of alleys, again catching glimpses of everyday life, careful not to disturb the just rising residents.  Our destination, one of the nine remaining classical Chinese gardens, The Master of the Nets, originally created in the 12th century, and then restored in the 18th century by the resident retiring official.  Guidebooks declare it the best of Suzhou’s gardens, given that parts of it have been meticulously reproduced for display at both New York’s Metropolitan Museum of Art (1981) and Paris’ Pompidou Centre (1982). 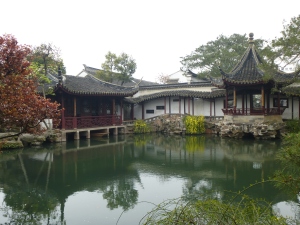 Maybe it was the early morning quiet, the soft flat light, or that we had the garden to ourselves for the better part of an hour, but it was a simple, deep breath into feeling the serenity and sanctity of this little jewel box, to imagining the rustle of silk robes along its stone paths, the soft settling of pink cherry blossoms onto the surface of its mirror-like pond, the subtle swish of the inked calligrapher’s brush on rice paper.  “The layout of buildings and gardens is extremely subtle, so that a small area gives the impression of great size and variety.”

Before we departed for Hangzhou, I purchased a set of hand coloured ink prints created by local artists housed at the Garden, depicting the four seasons along Suzhou’s canal and its cherry trees.

attending to the inner life to live and lead with kindness, clarity and wisdom; writing to find the beauty in her wabi sabi life
View all posts by Katharine Weinmann →
This entry was posted in Uncategorized and tagged Beauty, Chinese garden, Silence & Stillness, Suzhou, Travel. Bookmark the permalink.

I'd love to read what you think about this post. Cancel reply